Anyone following this review blog (and there are precious few of you, so I hope you feel special) will notice my preference for short books. In case you're wondering, I read long books too; just this last while I polished of 'The Book Thief' and I'm well into (and hugely liking) Tim Winton's 'Dirt Music,' not to mention Isabel Wilkerson's monumental 'The Warmth of Other Suns.' But I don't review everything I read, or for that matter most of what I read. That's the swell thing about a review blog. Nobody's underpaying me and I can do what I please. * I've dipped into the cartoonist Seth's books before and, while I've always liked his drawing style, frankly I've found his stories a bit dull. But this very little and most adorable book is different. It's a series of two-page spreads on books in Seth's personal collection, a miniature and highly personal essay on one side and a reproduction from inside the book on the other. Anyone who's interested in books or collecting would love this thing, but it can teach an uniformed lout like me quite a lot about the development of the comic form. Seth's voice is thoughtful, like 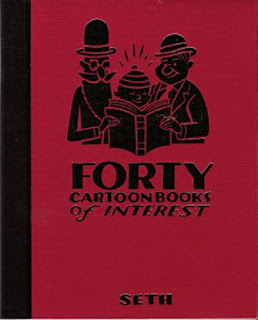 able, with no intention of being definitive. And the comic-strip introduction on the days of book-collecting pre-internet is delicious. (Seth, 'Forty Cartoon Books of Interest.' Buenaventura Press, 2006.)
Posted by Cary at 4:06 PM 1 comment:

Last month I was in New Brunswick for a week and instead of taking a novel, as I've always done while travelling, I took Phil Hall's book of poems, 'Killdeer.' Very good company, it turned out to be one of the most pleasurable poetry books I've ever read. And my need for narrative didn't go unsatisfied either. The pleasure comes in part from its autobiographical content, for this is a sort of portrait of the poet as a young (hapless, hopeless) man. For example, there's an extended poem about Hall hitchhiking to the town where Margaret Lawrence lived in order to meet her. His portrait is of a giving and rather lonely woman. * Sometimes Hall seems a little too easy on this version of his younger self (although he clearly didn't always have an easy time of it), and his self-mockery (such as for his first small book, printed in Mexico) is extremely gentle. Yet the warmth he feels for those days is part of the book's appeal. But what I really want to mention is the way Hall writes about Canadian authors, and especially poets, with such genuine reverence. Poetry isn't just important to him, it's crucial and life-giving. And because it matters so much to Hall and we are, after all, reading his book, he assumes that it is just as crucial for us. That we are camrades-in-arms. There's another extended poem, this one about his neighbour the late Bronwen Wallace, who one day knocked on his door with a new, typewritten poem, "the one we all know now." That poem is engraved on his heart and he expects it is engraved on ours. I can only blush that I don't know which poem he means. And when he writes, "We know Bron when we hear her," he expects that we all feel as familiar and as affectionate, whether or now we ever knew Bronwen Wallace personally 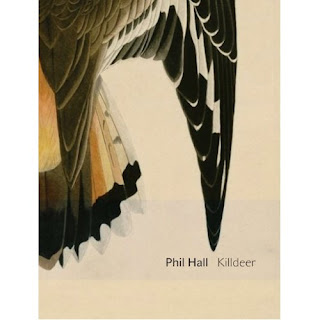 . What a lovely and notion, I only wish it were more true--for me, at least. * There is much more in this book than I am describing, but having finished it three or four weeks ago, it is these poems about other writers that have stayed with me. Such as a touching poem about the late Libby Scheier, with whom Hall took a car trip back to the house in Brooklyn where she had been abused as a child--sad but not without its slapstick moments. And now I must go and re-read Bron. So I can find the poem we all know, and know it too. * (Phil Hall, 'Killdeer. Bookthug, 2011)
Posted by Cary at 5:03 PM No comments:

Steven Heighton began attracting attention as a young writer at about the same time as Russell Smith and Andrew Pyper, but the three probably had less in common than was generally supposed. Their differences are more apparent now, but even back then Heighton struck me as the most serious of the three. By serious I don’t mean the best but the one who appeared to take writing as a solemn, even a sacred task.

That seriousness is certainly apparent in Work Book: Memos & Dispatches on Writing, a book small enough to slip into a pocket but that has a good deal of concentrated thought about writing in it. These are not journal entries or private thoughts, but personal musings intended to be read by others. They are divided into chapters such as “Memos to a Younger Self” and “On Reading”, and there’s also an essay (but also made up of broken paragraphs) on Heighton’s late mentor, Al Purdy.

Certain subjects come up over and over, most especially careerism, ambition, and competiveness. These entries sound like warnings of an author to himself and are perhaps the closest the books comes to a confessional tone. There is also much on authenticity, on language, and on the differences between fiction, essay, and poetry. There is the occasional Zen-like aphorism: “Every moment spent in full attention is a moment spent in eternity.”

Reading some of Heighton’s entries, I found myself nodding in agreement. For example, I too see writing is a kind of play, and believe that all writers (no matter how large or horrific the subject) retain something of the make-believing child in them. At other times, I found myself dismissing them as mere truisms (art comes from suffering) or as surprisingly conventional and wrong-headed (“Male writers are driven by a fear and hatred of mortality”). Sometimes the assertions (historical novels are easier to write than fiction set in our own time) seem quite ridiculous.

But the point isn’t whether or not I happen to agree. Heighton is a thoughtful person and he takes writing seriously enough to want to understand better what’s going on. He knows not to be complacent—as a writer or a human being. He encourages the reader to think hard too, to listen to his own life rather than simply let it slip by unaccounted for. It’s this insistent self-reflection that I find stirring and even inspiring. 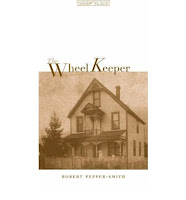 It isn't very often that we read a book, or watch a movie, or listen to a cd without knowing anything about it in advance. We come to almost everything with preconceptions that are already beginning to shape our response. Which is why, I suppose, that I picked up Robert Pepper-Smith's short novel, The Wheel Keeper. I'd never heard of it.

Robert Pepper-Smith cares about scene more than he does story. And so this story of Italian immigrants working in the orchards of British Columbia moves forward and backward in a way that I, at least, found rather confusing. But after a while I stopped worrying about it because the individual scenes were so wonderfully written--beautifully visual, emotionally tender, and poetic without being cloying.

There's one brief scene that I want to write about. It takes place in 1920:

"My grandfather is riding a bicycle from Dundee, Scotland through France to Italy. His father was a master slater in Dunee, his mother a weaver. I see him pedalling south to Italy on a bicycle with low-slung handlebars. In the bag strapped over the rear fender he carries a slater's hammer and a coil of copper wire."

A slater is a skilled workman who cuts stone into slate roof tiles. The man arrives in a small Italian village called Roca D'Avola during a rare snow fall. The men of the town are trying to put up a pole for a festival outside the village church, but a "moon-tugged" boulder has shifted up from the ground, making it impossible to dig a hole. The slater asks a young pregnant woman for a glass of water. He pours it on the rock, listening to the water run through the boulder's cracks, feeling the "exhaled air with his lips." He takes out his tools, makes a few quick taps here and there, and breaks the boulder up.

The scene last only a few lines but it is very rich--a scene of two cultures meeting, of the beginning of a love story (the slater falls for the pregnant woman, who is unwed), and also the start of a journey (he follows her to Canada). Perhaps it owes something to Michael Ondaatje, who is so good at similar scenes and who is also attracted to men with special skills, but the author's voice is his own. And there are many pages just as good in this little book.

I don't know anything about Robert Pepper-Smith, although a quick search just now finds that his second novel, House of Spells, has just been published. I found the first book by accident, but I'll look for this new one quite on purpose.

I'm a long term admirer of Gilmour's fiction in a grudging sort of way, have been ever since his first (and possibly still best) one, Back on Tuesday. He is an enviably graceful writer and, at his best, a wonderfully economical storyteller, a sort of combination of Hemingway and Salinger but taking himself less seriously than either of those two. (These sorts of comparisons are cheap but hard to resist.)

At the same time, at the simple level of connecting to a book, of liking its hero, I've always had a problem with Gilmour. And that's especially true this time around. This is a novel that reads like a memoir (and since Gilmour is a well-known man-about-town, it's hard not to associate the author with his character) and it's hard, for me at least, not to feel that the narrator is, well, an ass. Without going on about it, he strikes me as sexist, homophobic, and ridiculously vain as he recounts his various griefs, most involving women (always sexually alluring, sometimes treacherous) who for one reason or another he was no longer allowed to bed.

But the thing is--and I think it really is the thing--Gilmour lets us judge his character any way we like. And the simple truth is that most people are far less good than characters in novels (even great novels). He reminds me of Philip Roth or Nick Hornby, two very different writers, I know, but who share with Gilmour a willingness to present their unattractive maleness to the world.

Being a novel made up largely of memories, it doesn't have the forward-moving energy or quite beautiful form of his last novel, A Perfect Night to Go to China. On the other hand, Gilmour allows himself to wander farther here, so that there is, for example, a tremendously enjoyable chapter that pivots on his love for Tolstoy's War and Peace, and another (far more petty, but Gilmour allows himself that too) on the pain of a negative review.

Gilmour might indulge himself, but he doesn't pander to the reader. I can't imagine him writing a novel about World War Two, or the first Canadian balloonist, or moving north of the tree line--or on any other subject that helps to put a Canadian novel on the bestseller list. (To be fair, I like some of those books.) It feels like he has written exactly the novel he has wanted to write.